Chords are a very important aspect that you’ll be taught about in guitar classes in El Dorado Hills. Even though they are a bit of a struggle learning initially, however, you need not worry, it will get super simple with time. It all takes practice. Certainly, practicing correctly is vital in curtailing the learning curve, so the following are a few tried and tested tips that will help you learn guitar chords easily. 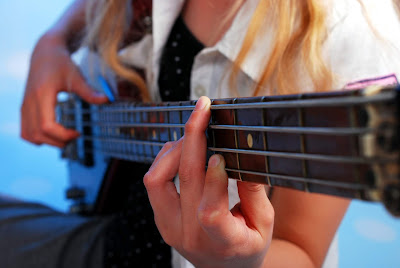 ü  Keep the fingers close to that metal fret which is closer to the body of the guitar, and push down hard on the string with simply the tip of the finger.

ü  Hold down a chord, and at first simply pluck one string at a time (arpeggio). Pay attention to the tone of each string.

ü  When the chords are being played that use the entire six strings, the thumb is supposed to be pressing against the back of the guitar, so you can hold down the strings harder. When you fret a chord where the low E string (thickest string) isn’t used (C major, A minor for instance), move the thumb over and touch the low E string slightly to mute it (very helpful for strumming, to keep the string silent if you strum it unintentionally).

ü  Be certain to keep away from bending any of the strings out of place, as it’ll after the pitch of the string, and the guitar will sound out of tune.

ü  After you can fret a chord with the entire strings ringing true, release the chord, shake the fingers, and make an effort to place them back into the same position. Once more, ensure the entire strings are ringing noticeably. It’ll build up the muscle memory of the hands, and in the fullness of time, the fingers will naturally form the shape of the chord.

ü  Make sure you carry out fret, shake-off, fret, shake-off practice ten times every day, on a regular basis, with each chord you would like to gain knowledge of. You will definitely make out that in a couple of weeks, you will have the chord sounding flawless all the time, with least endeavor.
Simply keep at it, do not get depressed if you have a hard time with a chord. Keep in mind that even the best guitar players were beginners at one time, every person went through the same learning process you’re undergoing right now. It all gets simpler and simpler with every minute of practice you put into learning the chords. During guitar classes in E Dorado Hills, you’ll get acquainted with these tips that will help get you on the right track. However, it is finally up to you to keep at it!